Mardi Gras season, or Carnival in English, refers to events and celebrations beginning on the Epiphany or Kings day.  It culminates on the Tuesday before Ash Wednesday, also known as Fat Tuesday or Shrove Tuesday, and refers to the last night of celebrations before the fasting begins for the Lenten season.


In New Orleans and other parts of the Gulf Coast region, from the Florida Panhandle (where we have been staying throughout the month of February) to East Texas, it is often celebrated with a party and a King Cake. This tradition was brought to the area by colonists from France and Spain, and seems to have spread from French Alabama. King Cake parties in Mobile are documented all the way back to the eighteenth century.
In modern times, the King Cake of Louisiana comes in many varieties. The simplest of which, is also said to be the most traditional. It is a twisted yeast bread ring, filled with cinnamon sugar, and topped with icing.  It is then sprinkled with colored sugars in purple, green and gold. The colors of Mardi Gras! It is also tradition to hide a small plastic baby in the cake. When it is served at a party, it is customary for whoever finds the baby, to provide the next king cake or host the next Mardi Gras party.
I have baked King Cakes several times in the past, and have even posted a version from Southern Living here.  Staying on the Gulf Coast the last few weeks, has inspired me to find another version to bake!  These cakes are more of a coffee cake and are sold in just about every grocery store in the area. In fact, the baker at Publix’s Supermarket was nice enough to give me the colored sugar topping (no charge) for my cake.  This recipe makes two cakes.  One my hubby and I enjoyed with morning coffee, and evening snack.  The second is in the freezer, where it will sit, until tomorrow when we head up to my son and daughter-in-law’s house in Atlanta! I will frost it and sprinkle on the sugars when we get there. I’m sure my grandsons will enjoy it! 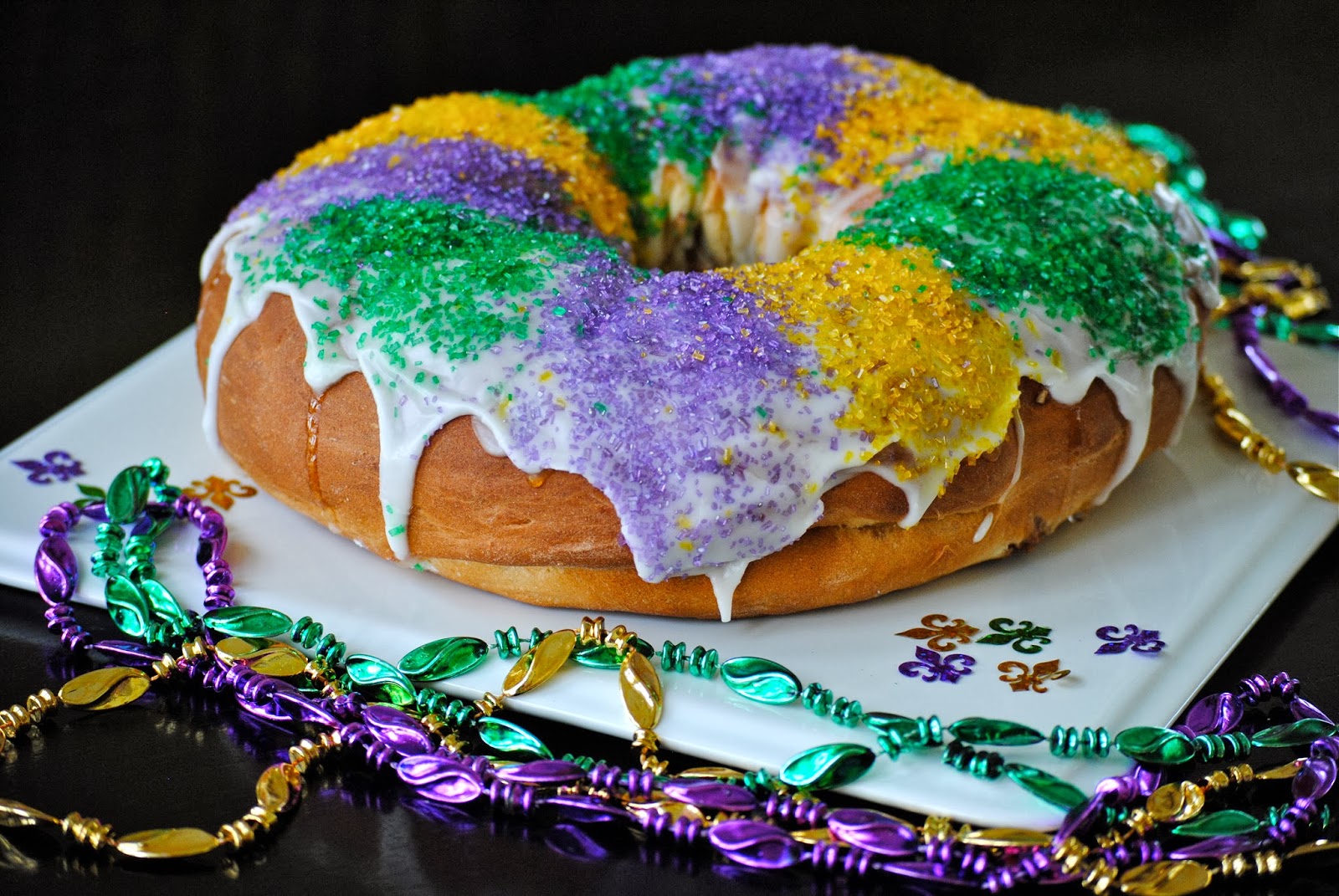 This is a sweet yeast dough that is filled with cinnamon, sugar and pecans. Then rolled up jelly roll style and baked. It is then glazed and topped with purple, green and gold sugars, the colors of the Mardi Gras!
INGREDIENTS:

1 or 2 tablespoons of milk

DIRECTIONS:
1. Scald milk, remove from heat and stir in 1/4 cup of butter. Allow mixture to cool to room temperature. In a large bowl, dissolve yeast in the warm water with 1 tablespoon of the white sugar. Let stand until creamy, about 10 minutes.
2. When yeast mixture is bubbling, add the cooled milk mixture. Whisk in the eggs. Stir in the remaining white sugar, salt and nutmeg. Beat the flour into the milk/egg mixture 1 cup at a time. When the dough has pulled together, turn it out onto a lightly floured surface and knead until smooth and elastic, about 8 to 10 minutes.
3. Lightly oil a large bowl, place the dough in the bowl and turn to coat with oil. Cover with a damp cloth or plastic wrap and let rise in a warm place until doubled in volume, about 2 hours. When risen, punch down and divide dough in half.
4. Preheat oven to 375 degrees F (190 degrees C). Grease 2 cookie sheets or line with parchment paper.
5. To Make Filling: Combine the brown sugar, ground cinnamon, chopped pecans, 1/2 cup flour and 1/2 cup raisins. Pour 1/2 cup melted butter over the cinnamon mixture and mix until crumbly.
6. Roll dough halves out into large rectangles (approximately 10x16 inches or so). Sprinkle the filling evenly over the dough and roll up each half tightly like a jelly roll, beginning at the wide side. Bring the ends of each roll together to form 2 oval shaped rings. Place each ring on a prepared cookie sheet. With scissors make cuts 1/3 of the way through the rings at 1 inch intervals. Let rise in a warm spot until doubled in size, about 45 minutes.
7. Bake in preheated oven for 30 minutes. Push the doll into the bottom of the cake. Frost while warm with the confectioners' sugar blended with lemon juice and milk, until you get a rather thin consistancy.