This weeks recipe took me back many years, to the summer we hosted a French Exchange student.  His name was Stefan, and he was with us for the entire summer.  I had asked for a girl, because my daughter was a sophomore in high school at the time.  There were more boys than girls that summer, and we were asked if we would consider hosting a boy. Why not?
We picked Stefan up at a predetermined facility on the New Jersey Turnpike.  He was an awkwardly handsome young man of 15, whose formal english was quite good, however being bombarded with fast talking Americans, was something that was probably overwhelming and difficult for him.  Initially Stefan was quite stoic, nothing like the loud family he was spending the summer with. Eventually he began to relax and enjoy our family. We were determined to give him a taste of American life, hoping in the end he would look back at his American summer with fond memories.

That summer was filled with many fun things.  Every weekend we would find something very American to do.  Trips to NYC, lunch at the Hard Rock Cafe (where he told me French parents would never want to eat), the Statue of Liberty, a Rodeo, a Fourth of July fireworks show complete with a Doo Wop group singing wonderful 50’s and 60’s music. And what’s more american than a baseball game at Yankee Stadium.  We ate lots of Pizza, and had many barbecues where hamburgers were a huge hit!  During this time, two of my daughters friends from Long Island were also visiting with us for a few weeks.  My house was wonderfully chaotic, filled with plenty of laughter and loud music! They all entertained each other and, by the end of his visit, he had really loosened up and bonded with us.
All too soon, the time  came when he would be going back to France.  Stefan asked if he could make a French treat for us.  He came prepared with a hand written recipe from his mother. The recipe was for Cherry Clafoutis.  It was the first time I had ever had this wonderful custardy dessert.  He told us that in France, they would eat this dish as a light supper.
We were all sad to see the summer come to an end, and say au revoir to Stefan.  We corresponded for awhile and then lost track of each other.  I often wonder about him, and if he ever thinks of his American summer. 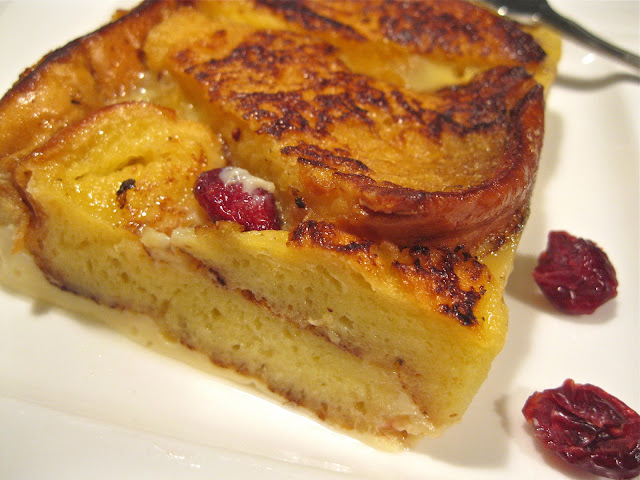 So back to French Fridays!  Although this recipe was for a French Toast pudding, it was the custard that brought back memories of the our summer with Stefan and his Clafoutis. This was an easy, delicious recipe. Bread pudding is a favorite, in our house, for dessert. This just seemed more like a breakfast casserole.  The next time I make it, I would probably choose to serve it for brunch or breakfast as opposed to dessert.
The recipe called for sliced brioche or challah.  You then make an egg batter with eggs, sugar and milk.  Dip each piece of bread into the batter and fry as for french toast.  Cut each slice of bread into triangles and line a 13 x 9 inch pan.  I made only half the recipe, so I used a 9 inch square pan.


You then make a custard using more eggs, milk, vanilla and sugar, pour over the bread. Place the pan in the larger pan of water (called a bain marie) so that the custard cooks slowly, then bake.  Mine was done in an hour.
I love custard!! And I love the French for coming up with so many wonderful ways to eat it!  This was a luscious dish, and if I were serving brunch for Mother’s Day, it would be on my menu. Another keeper for the month of May!! Happy Friday everyone!! And Happy Mother’s Day!

This recipe can be found in Dorie Greenspans cookbook “Around My French Table” or here.  Check out what other Dorista’s are up to here.