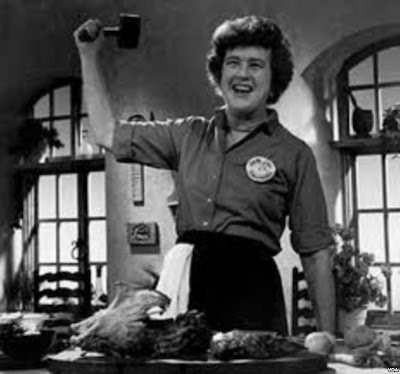 Julia Child was an American cook, cookbook author and TV personality! If you’re reading this you already know that!  However, Julia was so much more…she was funny and never took herself too seriously! I just read that, during one of her shows she was flipping pancakes, dropped one…said Oops…picked it up and continued with the show!  August 15th would have been her 100th birthday. As a food blogger, I could not let the day pass without a tribute to this wonderful, talented lady, whom I greatly admired.  She was an icon in the food industry.  Her cookbook, Mastering the Art of French Cooking, changed the way Americans cooked. In the early 60’s to promote her cookbook, Mastering the Art of French Cooking, she started to cook on a PBS station in Boston.  PBS thought no one was watching, until the fan mail started to come in. In 1963, after appearing on a television panel show, Child began a weekly half-hour cooking program called,  The French Chef.  This show pioneered an entire genre of cooking shows.  The show proved more successful than her book. She had an off-beat style, a what the hell attitude, knowledge, and a flair for teaching.  She was hilarious!  This made her very popular. Her work was recognized with a Peabody Award in 1965, and an Emmy Award in 1966.   Her success on television landed her at number 46 on TV Guide's list of the "50 Greatest TV Stars of All Time.”

As a child I remember her TV show…I would watch her with total fascination.  She was so animated and her voice would hold me captive, even though I wasn’t interested in the cooking.

Since then, I have accumulated most of Julia’s cookbooks.  I also belong to an online cooking group, Tuesdays with Dorie, that is cooking through Julia’s cookbook “Baking with Julia”.
So here I sit…raising my glass to Julia Child on her 100th Birthday!!   This quote pretty much sums up Julia’s personality.
“The best way to execute French cooking is to get good and loaded, then whack the hell out of a chicken. Bon appétit.”
Happy Birthday, Julia!
Please check out the celebration at  PBS Cook for Julia! I decided to make Julia’s Cherry Calfouti! Easy and delicious. Made with fresh "in season" cherries…oh so good!  In my best Julia Child voice...Bon appétit! 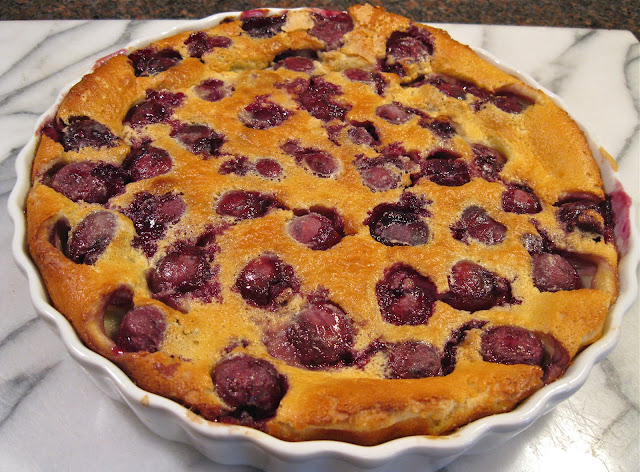 Directions
Preheat oven to 350 degrees F.
Using a blender, combine the milk, 1/3 cup sugar, eggs, vanilla, salt and flour, and blend.
Lightly butter an 8-cup baking dish, and pour a 1/4-inch layer of the blended mixture over the bottom. Set remaining batter aside.
Place dish into the oven for about 7-10 minutes, until a film of batter sets in the pan but the mixture is not baked through. Remove from oven (but don’t turn the oven off, yet).
Distribute the pitted cherries over the set batter in the pan, then sprinkle with the remaining sugar. Pour the remaining batter over the cherries and sugar.
Bake in the preheated oven for 45 to 60 minutes, until the clafouti is puffed and brown and a knife inserted into the center comes out clean.
Sprinkle with powdered sugar and serve warm.
Servings: 6-8 for dessert, 4 for breakfast.