Here we are at number 45 on Gourmets list of the 50 Most Influential Women in Food.  The Grande Dame of Mexican food, Diana Kennedy. Diana is to Mexican cuisine what Julia Child was to French. 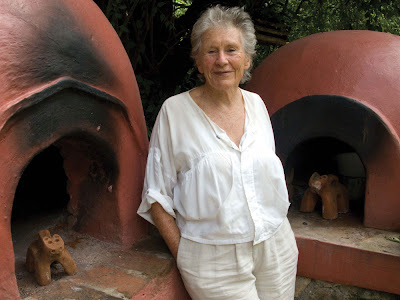 She was born in Loughton, Essex, UK in 1923. During WW2 she joined the Timber Corps. It was an organization created to replace the men in the forestry department, who were serving during the war.  After the war she emigrated to Canada. In 1957 she left for Mexico to marry her husband, Paul Kennedy, a correspondent for the New York Times.  She then started traveling the country in search of recipes, cooking techniques and the history of Mexican cuisine. After she published her first book, The Cuisines of Mexico in 1972, she became a leading expert on authentic Mexican cooking. Since then she has published a number of books including (at age 87)  Oaxaca al Gusto An Infinite Gastronomy, 2010. When reviews of this book came out she complained “I’m 87 years old; be serious, I’m not going to live forever”.  Feisty to say the least!   An  interviewer from the Washington Post called her fiery! I would say she's earned the right to be a bit tempestuous.

She was awarded the Order Of The Aztec Eagle, by the Government of the Republic of Mexico for her contributions to documentation of regional Mexican cuisine. The Aztec Eagle is the Mexican equivalent of Knighthood for the British.
Ms. Kennedy resides in Michoacan, Mexico. Now 89 still fit and, according to an NPR interview, still on the hunt for the perfect tamale.
I decided to make Diana Kennedy’s Torta de Cielo which is an Almond Sponge Cake. I did take a short cut with this recipe. I decided to use a bag of almond meal purchased for another recipe, instead of using whole almonds. Just in time for Cinco de Mayo…this cake was absolutely awesome!  "A  keeper” according to my husband!

Torta de Cielo, translated “Cake of Heaven”
Slightly adapted from a recipe by Diana Kennedy
Almond Sponge Cake
Ingredients
8 oz raw whole almonds (I used 1¾ cups almond meal)
1 cup granulated sugar
5 eggs, separated
2-4 Tbsp.  cognac
1 tsp almond extract
1Tbsp all-purpose flour
1/4 tsp baking powder
pinch of salt
Preparation
First, cover the almonds with boiling water and let soak for 4 hours undisturbed. After the almonds are done soaking, remove the skins by gently pinching. Dry almonds thoroughly and grind in food processor until they are very fine, but not powder.
Preheat oven to 325 degrees.
Prepare 9” cake pan or a similar size  baking dish by buttering the bottom and sides of the dish, then lining with parchment paper, then buttering the top of the parchment paper. Set aside.
Separate the five eggs. With a handheld or stand mixer, beat the egg whites until fluffy. Add the salt and continue beating until they are stiff. Add the yolks one by one and continue beating until incorporated.
Mix the dry ingredients together including the almonds and beating at low speed, gradually add them to the egg mixture.
Add the cognac and almond extract, mix well and pour into the prepared pan. Bake for 60-75 minutes in the middle of the oven. Let cool on a wire rack before removing from pan.
You can top the cake with powdered sugar or some fresh whip cream.
Here’s what we've been up to with our 45th Game Changer.....
Mary of One Perfect Bite
Val of  more than burnt toast
Susan of The Spice Garden
Taryn of Have Kitchen, Will Feed
Heather of Girlichef
Miranda of Mangoes and Chutney
Jeanette at Jeanette's Healthy Living
Linda of There and Back Again
Barbara of Moveable Feasts
Nancy of Picadillo
Mireya of My Healthy Eating Habits
Veronica of My Catholic Kitchen
Claudia of Journey of an Italian Cook
Alyce of More Time at The Table
Amrita of Beetle's Kitchen Escapades
Martha at Simple Nourished Living
Jill at Saucy Cooks
Sarah at Everything in the Kitchen Sink
Annie at Most Lovely Things
Sue at The View from Great Island