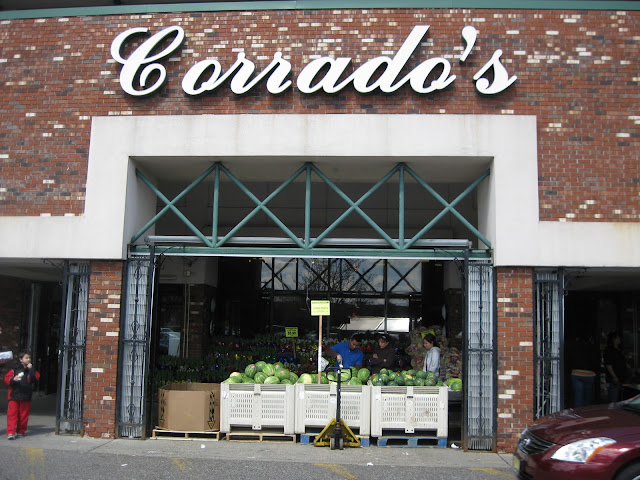 Every year, my girlfriend Linda and I, make our annual pilgrimage to Corrado's Market for an Easter food shopping trip. We both look forward to our little excursion….It has become a tradition! Usually we make a day of it and stop for a nice lunch but, since Linda is working longer hours this year, we decided to go on a Sunday.  Paterson, where Corrado's is located, is about an hour from where we live. It is a very ethnic area.  My grandfather always made trips to a Lebanese market there when I was a child. Since it takes so long to get there, we usually include a trip to Nouri's, a Middle Eastern grocery and bakery.  They have the best Pita bread you will ever taste. Nothing like the round loafs of cardboard that you buy in the grocery store. Shopping in Corrados is not like any other grocery shopping. It is an experience!! Bountiful, incredible, and awesome are some of the words I would use to describe this store! You can find just about any ethnic food there, not to mention the freshest fruits and vegetables. Cheese from all over the world! All kinds of sausage. Beautiful breads! You won't find any Wonder Bread in this store! It is isle after isle of amazing food and great prices! I really wanted to share this experience with you so, I took  a bunch of photos!
While we were there, I bought the most beautiful green squash. They are shorter and plumper than zucchini. They are called koosa in arabic.  My grandmother and mother always made stuffed koosa and  grape leaves. They were a staple in our home. Since I am going to my daughters house for the week-end I thought, I would make them to take out to my grandkids. The stuffing is similar to a stuffed pepper. The difference being, my stuffing is made with lamb, rice and tomatoes. The seasonings are cinnamon, salt and pepper. I told you before that the Lebanese love their cinnamon! The squash is hollowed out using a tool that is long and slender. Mine is from my grandmother. It is made of metal. They still sell these tools in Middle Eastern grocery stores. The Middle East is famous for their stuffed vegetables, most notably the stuffed grape leaf! We use the same filling for either. I also like to stuff peppers and put them in the same pot with the squash.

Basic Meat Rice Stuffing for Grape Leaves, Squash, Peppers.
1 pound ground lamb or beef
1/2 cup of raw short-grain rice
(you could use up to a cup if you like a lot of rice, if
you increase rice increase the tomato puree)
1 teaspoon cinnamon
1 teaspoon salt
1/4 teaspoon pepper
1 cup tomato puree
tomato juice or more tomato puree for pot
Mix the meat, rice, 1 cup tomato puree and seasonings. Stuff your squash and/or peppers. Arrange in pot. I use tomato puree mixed with some water, salt and pepper, pour around the stuffed vegetables. Bring to a boil then reduce heat to simmer and cook for 1 1/2 hours or till rice is tender. I put a rack on the bottom of the pot so they do not burn.