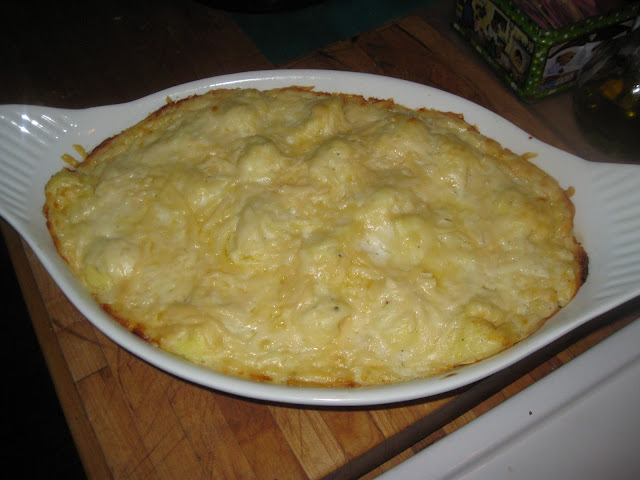 Well here we are, it's Friday again!! Today we are driving to Long Island for my twin grandsons 3rd birthday.  They are such a joy and so much fun to be around, as is their big sister. So this is going to be a very busy week-end. I made my Gnocchi a la Parisienne yesterday. I’ve made pasta in the past, but have never made gnocchi. It is something I always wanted to try…Italian style! Made with potatoes and served with some sort of sauce. I never knew there was any other kind. The process for making the gnocchi was a bit like making a Pate a Choux…the kind of dough you make for cream puffs. Since I’ve made Choux pastry before, this went well, and was quite effortless! Next, I let the dough rest, as suggested by Dorie, while I made the béchamel sauce. I again made this as per the recipe. 2 1/2 T. of butter and 6 T. of flour. I thought it needed more butter, but I stayed with the recipe. As I added the milk, I thought it was difficult to incorporate. The end product was a very thick sauce that I felt had to be thinned, which I did. I let this sit with plastic wrap placed over it, as Dorie suggested and started the pot of water boiling, for the gnocchi. As I got the hang of it, it became easier.  I sprayed my spoon with cooking spray, and they slid easily into the water. My dish was prepared with the parmesan cheese and the layer of béchamel.  They were quite easy to cook and the process went relatively fast. I put them in the dish, covered them with the béchamel and cheese, dotted on the butter, and then realized that I wanted to take them today to my daughter's house for dinner. OK!!! Only after I went through all of this did I bother to read the sidebar. ONCE THE DISH IS BAKED THOUGH, IT'S MEANT TO BE EATEN IMMEDIATELY AND FULLY….LEFTOVERS WON'T KEEP.  This happens to be a very bad habit of mine; never fully reading through before I start! So I froze the whole dish. We will bake it tonight at my daughter's house.  I will let everyone know how that worked.

As I said, I froze my Gnocchi already prepared to be put in the oven.  We ate it tonight for dinner and it was pretty good. I am not sure whether freezing it changed the texture, but it was a little softer and not as chewy as I thought it would be. I'm not sure I would make this again. I think I like good old American Macaroni and Cheese better!
This recipe can be found in Dorie Greenspans new book 'Around my French Table'.